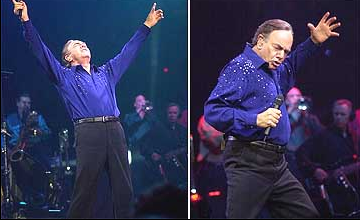 By Carol Robidoux
Imagine the biggest karaoke bar in the world and, center stage, a guy in a glittering blue shirt and thinning hair, belting out that song by Neil Diamond everybody loves, “Sweet Caroline.”
Now imagine more than 10,000 people standing, swaying and singing along as if the words to the song actually mean something more than they do.
Right there you have the climax of last night’s show at the Verizon Wireless Arena, only it wasn’t a karaoke bar, and the man with the microphone was THE man himself, Neil Diamond.
It was a first for many New Hampshire fans who’ve waited a lifetime for the seasoned crooner to make his way to the Granite State.
And based on the sell-out crowd that spanned several generations of fans, it’s possible Diamond is even bigger than he was when his string of Top-40 hits began in the 1960s.
The show opened with “Coming to America,” a real crowd pleaser — as if any song about America could be a clunker these days. But Diamond did it right, backed by his 17-piece band that included a four-piece string section, horns, steel drums, guitars, keyboards, and backup singers.
After the first song, Diamond took a moment to playfully editorialize about the quality of the Verizon’s sound system, which has been criticized as too echoey, at times.
“It’s a record crowd here at the Echo Capital of New Hampshire. But don’t worry — the echo is absorbed by your clothing,” said Diamond. “And so I’ve been asked by management to ask that you don’t take your clothes off during the show.”
Of course, the crowd went wild every time Diamond unleashed his subtle sexuality. In particular, as Diamond prepared to sing, “Girl, You’ll be a Woman Soon.”
That’s when Annette Simard, 70, of Manchester noticed the singer was working up a sweat. So she stepped to the front of the stage, pressed a white tissue to her lips and then held it toward Diamond.
Slowly, Diamond walked over toward Simard, knelt down for the tissue and, before she knew it, was holding her hand. He sang the entire song to her as they shared the spotlight, at times as he sat, or even stretched his body out in front of her on the stage. The swooning Simard covered her face at times and appeared to be weak in the knees, as the crowd erupted in cheers and laughter.
“Has anybody got a cigarette?” asked Diamond at the end of the number. “Thank you, my darling. I’ll take experience over youth any day. I like a woman who comes and gets what she wants,” he said, as Simard stepped back to her front-row seat.
Throughout the rest of the show Diamond proved that there are perks to sustaining a career for more than four decades.
For one thing, your fan base keeps regenerating, evidenced by the age span of the crowd that included plenty of mother-daughter duos, such as Patricia Salois, 51, and her daughter Christine, 26.
“I like the way he moves,” said Christine.
“He seems like an honest, down to earth guy,” said Patricia.
“There’s no such thing,” said Christine.
“He looks just like my father,” said Patricia.
And there you have the essence of what it is about Neil Diamond that makes it possible for him to keep a sold-out arena full of devoted fans swooning for two-and-a-half hours.
Midway through the show Diamond started churning out his hits, including “Solitary Man,” “Holly Holy” and “Cherry, Cherry.”
He even launched into a few of the songs that have made others famous, like “Red, Red Wine,” which was never a hit for Diamond, but that put UB40 on the map, and “I’m a Believer,” which has rounded the charts twice — for the Monkees back in the 1960s and again last summer for Smashmouth as part of the “Shrek” soundtrack.
Just before 10:30 p.m. Diamond finished up with “I Am, I Said,” then rewarded the crowd with an encore that included “Cracklin’ Rosie” and “Brother Love’s Traveling Salvation Show.
Posted by Carol Robidoux at 12:00 PM No comments: Links to this post

Back to Home Page

Carol Robidoux
Manchester, New Hampshire
Freelance journalist for hire, also at your service as a photographer, podcaster, and licensed Justice of the Peace. Follow me on Twitter: @carolrobidoux