She was guardian to a 'hero'


WASHINGTON, D.C. – Tonight's premiere of HBO's 10-episode miniseries "The Pacific" is the latest cinematic offering by executive producers Steven Spielberg and Tom Hanks, a third take on the bloody battles of World War II and companion film to their previous collaborations, "Saving Private Ryan," and "Band of Brothers." 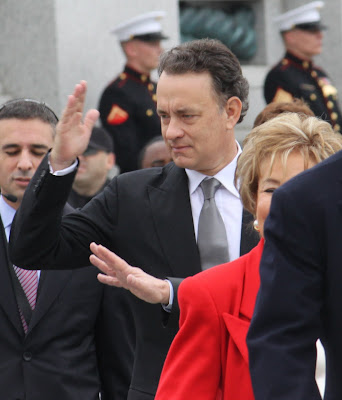 Joe Byron of Hooksett, founder of the Honor Flight New England chapter, and his volunteer board had only about a month to organize the two-day trip, which was all expenses paid by HBO.
Byron's now seen to it that 142 local veterans have made it to see the World War II Memorial. With a waiting list of well over 300, Byron is doing his best to schedule 10 flights this year. He has enough in the donation till for about two flights, even though there are already five on the calendar.
He hopes the national exposure this week will increase awareness of the urgent need for donations, as veterans from that era are dying at a rate of 1,100 each day.
James Goins of Portsmouth was thrilled to get the call about the trip. He survived the war and went on to retire from the military in 1971. Surviving cancer is his current mission. He spent much of the trip taking it easy, suffering from fatigue and upset stomach. One of the younger veterans on the trip, Goins was 15 when he volunteered for service in 1943, slipping through a huge military crack that, in wartime, was enlisting most any able-bodied male who could vouch for himself.
"I had an older brother already in the Army, and I just wanted to be there, too," said Goins. "I didn't even know where Pearl Harbor was. I just knew I wanted to be part of it."
Whereas most Honor Flight trips are whirlwind one-day affairs, corporate sponsorship allowed for bells, whistles and fanfare this time around.
At Boston's Logan 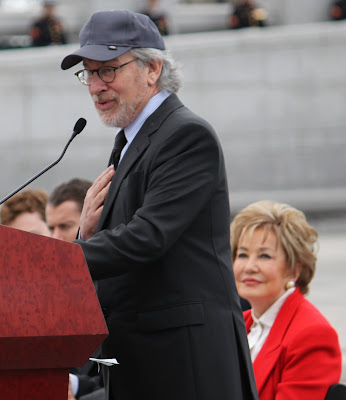 Airport, New England veterans were whisked through security to a double line of American flags leading to a room jammed with family, friends and strangers, all waving flags and cheering. The U.S. Air Force Band of Liberty, from Hanscom Air Force Base, played on as cake was served and tears flowed.
Paul Lindstrom of Hampton was there to see off his dad, Ed Lindstrom, whose personal story is as compelling as any character Spielberg or Hanks could conjure.
"My mother was engaged to his best buddy, and he had to break the news to her, that (the buddy) was killed when their ship was sunk. That's how they got together," said Paul Lindstrom. It was a marriage that lasted 62 years. "There's a reason for everything," Lindstrom said.
The group flew into LaGuardia Airport, picking up an Honor Flight group based in New York, then on to Ronald Reagan National Airport in Washington, where the call had gone out to all active-duty military and the public in general to come and welcome the fleet of chartered Honor Flights arriving all day.
Robert Curtis of Bar Harbor, Maine, walked slowly under the archway of yellow balloons that led to a path lined with supporters that snaked through the terminal as far as the eye could see, all the way to the tour bus waiting to take the vets to the Crystal City Marriott in Arlington, Va.
He tried to take it all in.
"I've been to a lot of conventions, seen a lot of things, but I've never seen anything like this. It overwhelms me. Really brings a tear to my eye," he said, shaking endless hands attached to strangers, each one leaning in close to thank him, personally, for his service.
"You spend a lot of years thinking about those days, and then you get to an age where you start to wonder if it mattered all that much. We never knew how much we did, until now; now we know. This is once in a lifetime, for me. It has restored my sense of how great this country really is," said Curtis.
The climax of the trip came at the memorial, where Spielberg and Hanks spoke about the why of their movie-making efforts. For Spielberg, it's personal. His father, 93-year-old Arnold Spielberg, is a WWII veteran.
"With each passing generation, more and more people are forgetting about World War II," Spielberg said. "This is why I made 'Saving Private Ryan.' This is why Tom Hanks and I made 'Band of Brothers' and 'The Pacific,' because all of you are the greatest stories ever told, and we are honored to be able to tell these stories to our kids, to your grandkids, your great-grandkids and the world at large. We celebrate, we commemorate, we memorialize your stories so the world you saved will never, never forget you."

The thing about New Year’s day is, unless you are heading to Philadelphia for the annual Mummer’s Parade, there isn’t much left to do, what with Hanukkah and Christmas under your belt — and around your hips, thighs and abdomen. Nothing much to do except update your New Year’s resolution list.
So there you sit with your hand in a bowl of leftover onion dip, thinking about your life. And once you start dwelling, there’s no end to the remorse you feel over all the obvious bad things you do.
You secretly smoke. You eat chunks of real butter. You curse at the dog. Regular exercise means brushing in a circular motion twice a day after meals. Your best friend lives in a bottle and his name is Bud Weiser.
And now, just because the clock has struck midnight for the 366th consecutive day, you decide you’ve had it with your unhealthy lifestyle. Again.
Well, before you crush your last pack of Marlboro’s or pay the MasterCard bill for that Wii Fit you charged in a moment of desperation, I have to tell you something very important: DON’T DO IT!
That’s right. This year, I’m urging the public at large not to make a bunch of noble resolutions they will fail to keep.
First of all, take a look at the word “resolution.” Break it down, as your high school algebra teacher would say.
Re-solution. Sounds to me like solving a lifetime of mistakes again and again, year after year.
And the reason that we make New Year’s resolutions each and every year?
Class?
Anyone?
Do I see a hand in the back of the room? Yes, you there, with the light bulb over your head.
That’s right. We haven’t been using the correct dictionary.
So now that we’ve broken it down, let’s look it up. I’m using Webster’s Ninth New Collegiate Dictionary:
“Resolution: noun; 1. the act or process of reducing to simpler form, as the act of analyzing a complex notion into simpler ones.”
Ah HA! It seems we’ve been approaching this New Year’s resolution thing all wrong by asking, “What bad unhealthy habits can I break this year?”
The obvious answer is: none of them. If making resolutions every year worked, we’d all be living a clean, sober, bad-habit-free life. We’d all be rich, due to our bountiful savings accounts. We’d have rippling abs, low cholesterol, and be working part-time as a volunteer at the local homeless shelter.
If only we’d looked it up sooner in Webster’s Ninth, we’d have known that to have a happier new year, all we have to do is reduce our lives to a simpler form.
Consider the stressors that lead us to overeating, overdrinking, oversmoking, overworking, oversleeping, underexercising and generally underachieving, especially when there’s something good on HBO. It’s really not the basics of life that lead to our frustrations — working or parenting or being married or being single. It’s the complications that get us.
We smoke because we think it calms our nerves. And our nerves are shot because we haven’t figured out how to simplify our lives. We drink too much because the buzz feels better than the burn we endure after working out. We settle in and watch others' lives pass before our eyes on the latest reality TV series because, frankly, we’re too tired to have a live of our own. After clocking out, stoking the home fires, and scrambling after the loose ends du jour, we're lucky to make it up to bed before falling asleep on the couch.
We eat too much because it’s the only productive thing we can do when life feels overwhelming. We don’t need better eating habits. We’re all familiar with how to right our toppled food pyramids. We just need to be underwhelmed.
Workaholics know, deep down, that the only thing really gained by overworking are more reasons to overwork, leaving less time to enjoy the life you’ve worked so hard to achieve.
And often, we oversleep when we’ve spent half the night staring at the ceiling, counting our worries like sheep. So enough with the worries already.
I’ve come to the conclusion that this year should be the last year anyone will have to labor over which resolutions to make, keep and break. I urge you to start this New Year by getting your hand out of that bowl of onion dip in a hurry. It’s time to find your New Year’s Solution.
If it’s a kinder, gentler, simpler life you need, then figure out what you can do to simplify your life this year.
I should start by cleaning out all the closets in my house. Then, I’d have a place to put all the stuff that piles up everywhere which makes me feel overwhelmed by how messy things are in my world. That’s not just a metaphor. But I know that endless clutter isn’t the underlying reason for my other bad habits.
By definition, all I have to do is make it simple, once and for all.
So, here’s my five-step solution to reduce stress and guilt in 2010, which should do it, once and for all:
1. Prioritize my daily to-do list, making sure I never again lose sight of who and what is most important to me.
2. Hug the ones I love every chance I get.
3. Be honest. About everything. Especially to myself.
4. When things feel overwhelming, take a deep breath and say out loud: “In the scheme of things, this is not a big deal. I can handle anything.” Then, go and handle it.
5. Lay off the onion dip.
Now it's your turn; what's YOUR New Year's Solution?
Posted by Carol Robidoux at 1:48 PM No comments:

Back to Home Page

Carol Robidoux
Manchester, New Hampshire
Freelance journalist for hire, also at your service as a photographer, podcaster, and licensed Justice of the Peace. Follow me on Twitter: @carolrobidoux